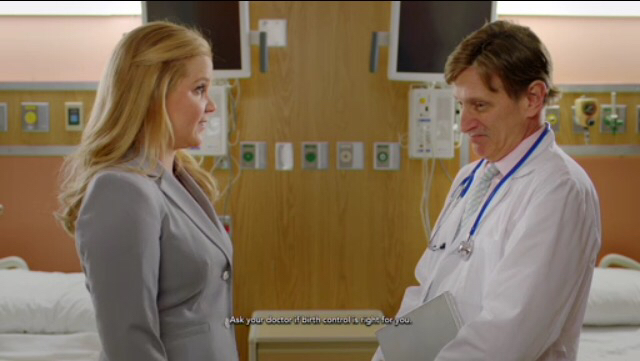 http://www.cc.com/video-clips/whzt7k/inside-amy-schumer-birth-control
I know that at some point during States, I will think about all of the men and women who cannot afford health care in this country, let alone the women who lack access to affordable [birth control.](https://www.plannedparenthoodaction.org/issues/birth-control/facts-birth-control-coverage-women) I’ll think about how unfair and wrong and embarrassing it is: for the greatest country in the world to treat so many of its own disadvantaged people as if universal health care is not a right. [UPDATE: Not one states supports the proposed American Health Care Act. ](https://www.nytimes.com/2017/06/14/upshot/gop-senators-might-not-realize-it-but-not-one-state-supports-the-ahca.html?_r=0) Plus, recall the global Gag Rule that Trump reinstated in one of his first human rights defying acts. Broadly, the Gag Rule prevents the U.S. from funding any organization that even mentions the word abortion. [“To receive American funding for any of their family-planning work, in other words, groups would have to promise that they wouldn’t even speak of abortion—hence the nickname that the policy’s exasperated critics soon coined: the global gag rule.”](http://www.newyorker.com/news/daily-comment/trump-makes-the-global-gag-rule-on-abortion-even-worse) This rule is archaic and barbaric. If you care to read more in depth, please do. Here’s a start: [68,000 women die every year](http://www.newyorker.com/news/daily-comment/trump-makes-the-global-gag-rule-on-abortion-even-worse) trying to end abortions unsafely, on their own, because they have no other options. When women have access to family planning care, they are much less likely to perform an unsafe abortion. Abortions have actually been shown to *increase *with Gag Rule restrictions. Let me summarize further. Trump’s executive order that reinstated the global gag rule will stop [$8.8 billion for family planning programs](https://www.washingtonpost.com/news/to-your-health/wp/2017/05/15/trump-expansion-of-abortion-gag-rule-will-restrict-8-8-billion-in-u-s-aid/?utm_term=.d9841d69863e), including those related to AIDS, malaria and child health. About $6 billion of that supports programs for HIV/AIDS services, primarily in Sub-Sahara Africa. This doesn’t sound good, right? It’s not. Let us recall that [over one million people died from HIV-related causes in 2015](http://www.who.int/gho/hiv/epidemic_status/deaths_text/en/), and almost half of a million people [died from malaria in 2015](http://www.who.int/features/factfiles/malaria/en/)–the vast majority of these deaths are in Sub-Sahara Africa. Pulling U.S. aid to organizations that are consistently saving lives through family planning, contraception, abortions when necessary, HIV and malaria prevention and treatment is inexcusable. If you are pro-choice, that’s wonderful. It’s not my business. But, when it comes to aiding preventable deaths that rank in the millions, U.S. aid is all of our business. I think I’ll need to run 100 Western States in order to fully comprehend how wrong this particular executive order is. What can we do about it? 1) Run like we mean it. Realize how freaking privileged we are. 2) Vote in every election, local, state-wide, and federal, using our BRAINS. 3) Talk about it. Whatever riles you up. This riles me up, because it’s wrong. 4) [Donate nationally,](https://secure.ppaction.org/site/Donation2;jsessionid=FA67B0F1DFD4A9B881F1F935532D975A.app259a?df_id=17835&17835.donation=form1&s_src=Evergreen_c4_AC_banner) or [internationally](http://www.unfpa.org/family-planning) to organizations proven to improve and save lives.

11: Do You Think Jerry Runs Ultras?