This blog highlights how to minimize our impact on the trail. Though not exhaustive, it covers the basics.

As trail runners, we should follow Leave No Trace (LNT) ethics, which are simple: while enjoying natural spaces, from wilderness to our own backyards or local bike paths, we should run with as minimal impact as possible. But, we must realize that this requires action. It doesn’t mean just tiptoeing through the trails. This covers:

According to the Leadville 100 Race Director, Paul Anderson, “Poop on the side of the trail on the Leadville course is our number one environmental problem.”

Trail runners: we must educate each other. **We must poop responsibly. **

Choose an area that receives maximum sunlight, as the heat from the sun aids decomposition. An area with deep organic soil is best because it will also help decompose the feces; this soil usually dark and rich in color. The goal is for the feces to PERCOLATE INTO THE SOIL before reaching water sources.

How to poop outside. (Leave No Trace)

Fill in the hole with organic material (dark, rich dirt) and cover it with similar natural materials when finished.

Also pack out tampons and other hygiene materials. Bring a plastic bag, put your tampons in it and pack it out with you until you can dispose of in a proper trash. Or better yet, use a menstrual cup! 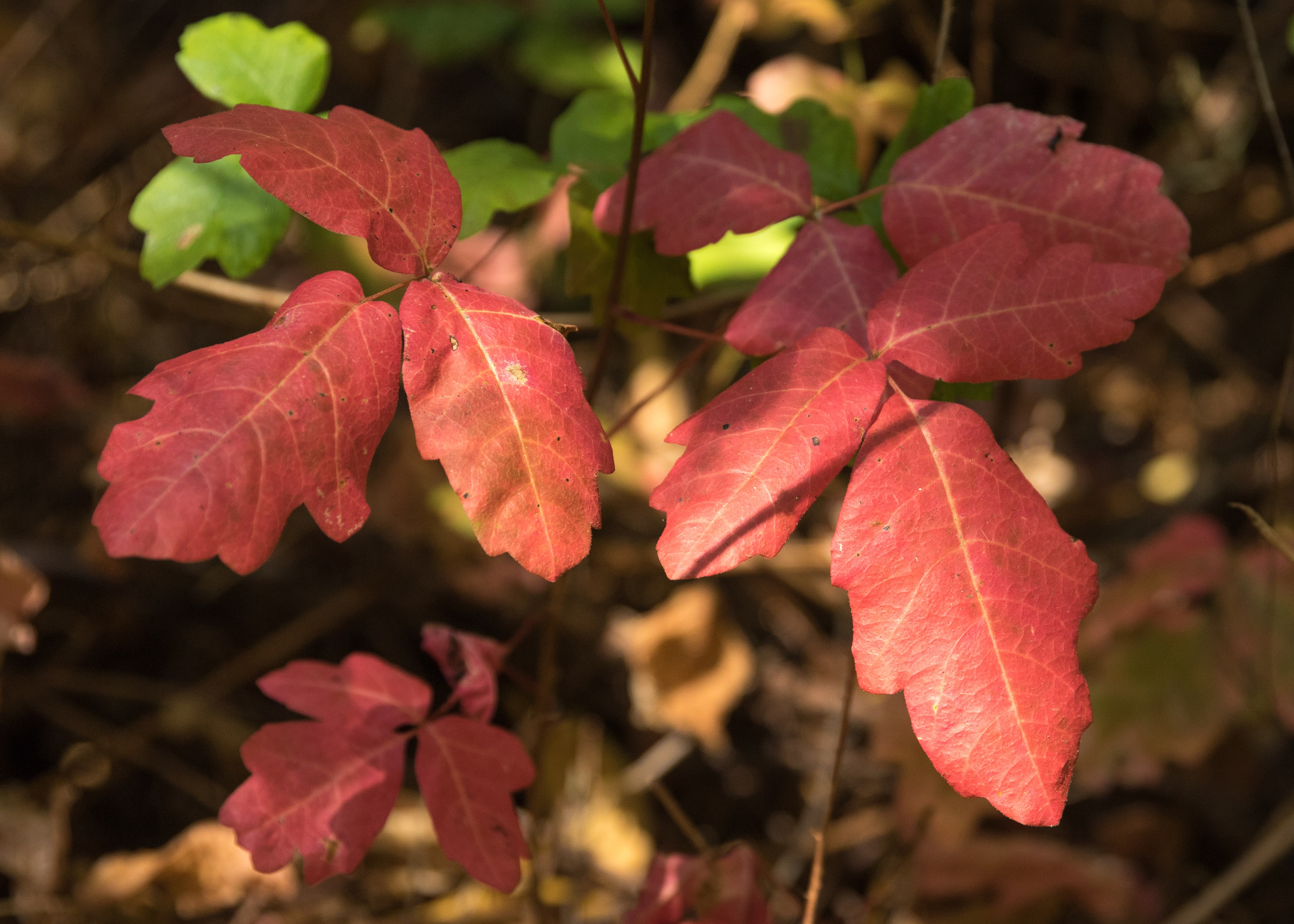 If you’re going to use natural toilet paper, don’t use poison oak! Identified by the three leaflets on a stem, this is poison oak in its red phase. It can also be green and grows throughout western North America. (Frank Schulenburg)

It’s okay if you or your friends didn’t know how to properly poop in the woods until reading this. Poop shaming is pointless if someone isn’t educated on the topic. Now is the time to educate each other and then we can poop shame our friends into doing it correctly. With increased trail usage across the world, we must ensure our community is poo-ducated.

To be honest, the first time I fully conceptualized what six inches means was at Rob Krar’s Ultrarunning Camp in Sedona, AZ, just two years ago. Sure, I knew that I had to dig a hole and not be an idiot, but seeing a fellow trail runner, Rob’s wife Cristina, measure six inches in the air with her hands was when it really stuck with me. It’s not a shallow hole. It’s a deep hole. Our poop needs to be buried in order to:

Minimize the possibility of spreading disease.

It's gross. Bury your shit!

Note: Some places are so fragile or do not have enough rich soil, like some deserts, that poop doesn’t decompose easily, so it should be carried out. There are a handful of trail races that require this, like Ultra Trail Mt. Fuji. And climbers know this all too well: you cannot bury your poop on a rock face.

Who wants to run on a trail strewn with pieces of gel wrappers? I think if anyone says they don’t care, then they should be happy running on a treadmill for the rest of his or her life. Our community is one of “trail runners” because of shared values for the love of the outdoors. 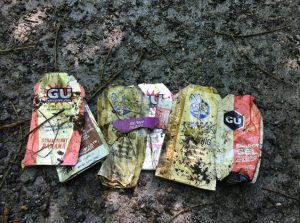 Don’t forget to pack out the tabs of your gel wrappers. Even a tiny piece of plastic wrapper is still trash. Leaving no trace also includes picking up trash that others have left behind. Leaving the trail cleaner than when we found it is the best (most rewarding) way to run. And if you want to reach ultimate trail cleaning euphoria, bring a trash bag and PLOG AWAY!

3. BRING YOUR OWN CUP

Running an ultra without using one single piece of single-use plastic is as rewarding as finishing the race itself. It’s the norm in Europe, it’s becoming more of the norm in the U.S. and it should be ubiquitous if we show race directors that WE DON’T NEED NOR WANT single-use cups.

At CCC in 2017, I set a course record without using a single cup. Those aid stations were filled with runners, crew, multiple languages, and I was always capable of taking out my reusable cup and getting it filled with whatever liquid or food I needed without wasting any time. There’s truly no excuse to not bring our own cups.

I laud the large races, like UTMB and THE NORTH FACE ENDURANCE CHALLENGES, for showing that it’s not just the small, backyard trail races that are cupless. That being said, if you do see a race of any size or scale, don’t be shy in sharing resources on how why they should go cupless.

Boulder-based ultrarunner Cordis Hall echoes this at other large overseas races: “Hong Kong 100 and TransGranCanaria were both cupless. I personally really like the ability to leave aids with coke/soup and not have to worry about finding a trash can later on.” 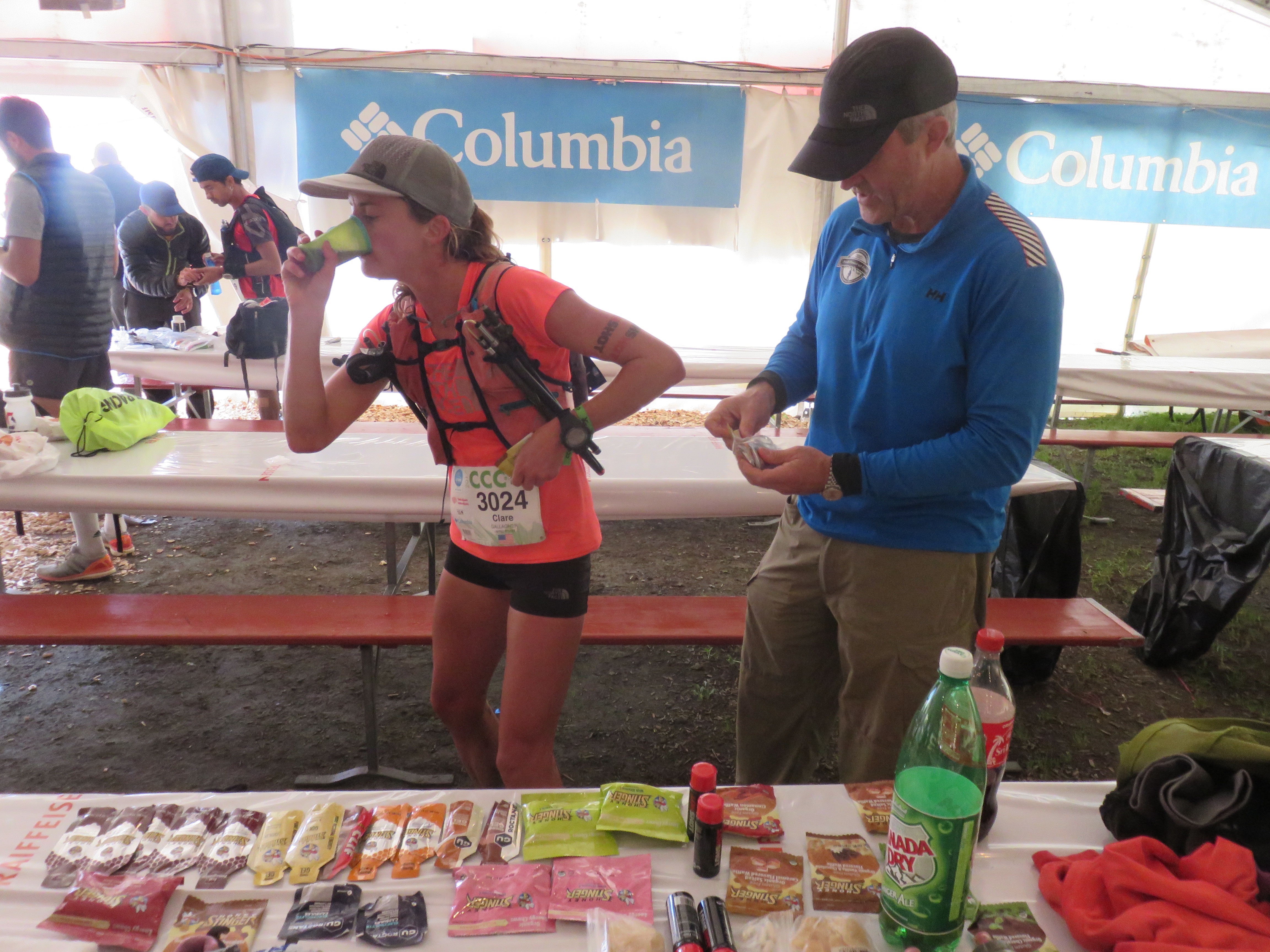 REUSABLE SINGLE-USE CUPS are self-explanatory and easy to purchase. But, for many of us, we might already have more than enough from races that give them out. So, in addition to bringing the reusable cup, it’s on us to say “NO THANK YOU” the next time a race offers another one.

Leadville race director, Paul Anderson, also says that “Crews often leave the most trash behind. Our trash and recycling collection at Twin Lakes is basically all from the crews and friends of runners.” 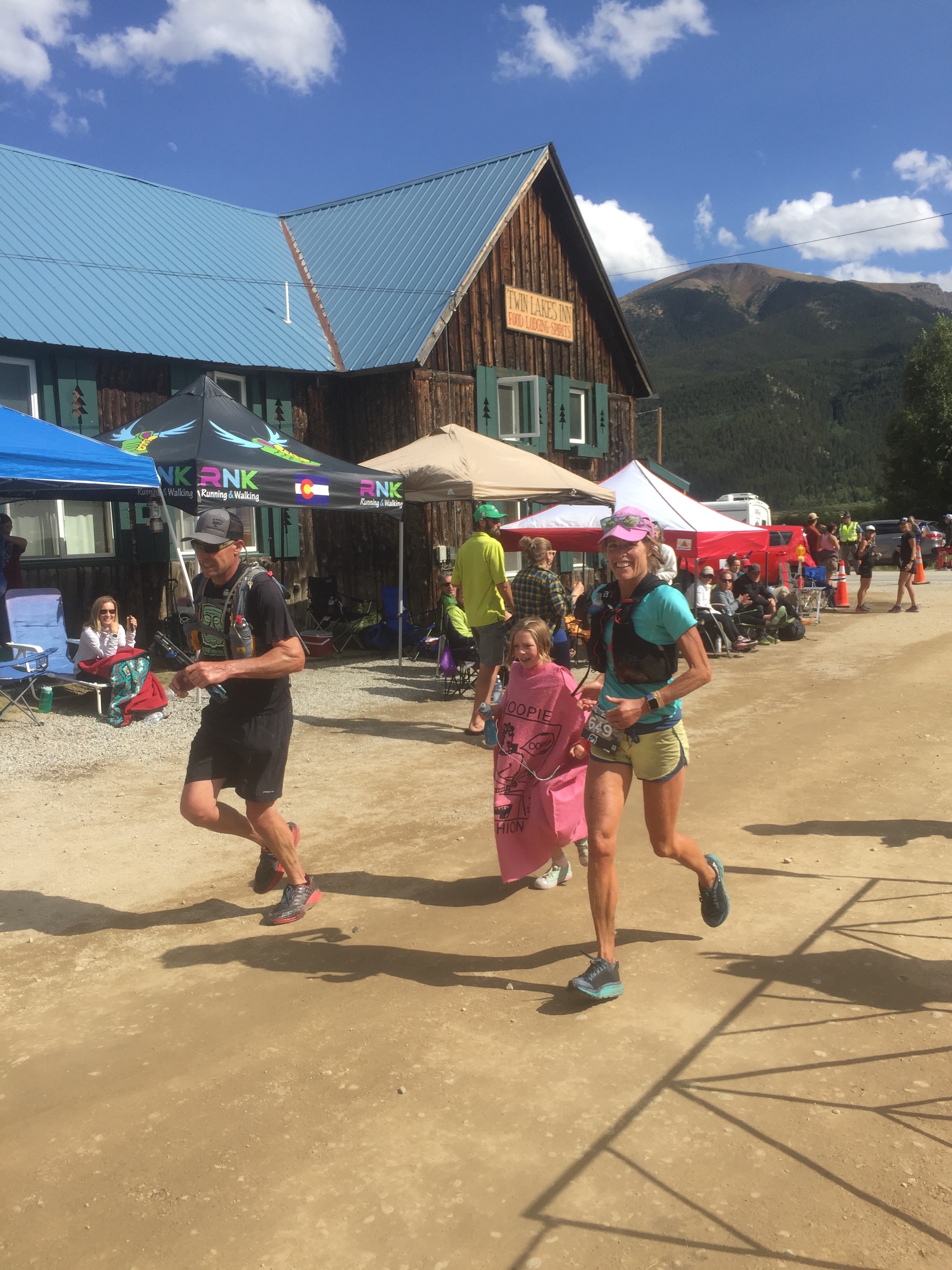 At Twin Lakes during the Leadville 100, crews leave an alarming amount of trash and gear. Katie Arnold en route to her 2018 win. (Clare Gallagher)

So, we should educate our crews to follow these same practices:

If they balk, just say “Hey, this is how the trail running community operates. We want to have as minimal impact as possible. Thank you for being a part of this!”