Last week, I went to Washington, D.C. with the non-profit Protect Our Winters in order to lobby for climate change policy. In short, lobbying is when a group with a specific interest speaks to lawmakers about their concern, urging them to take action.

In our case, we asked lawmakers to take action on climate change because it's impacting our various jobs, health, and experiences within the outdoor industry. We were comprised of business leaders, from the CEO of a company that makes an adhesive found in almost all active wear, from the CMO of Aspen, you know, the little ski resort nestled in Colorado's Rocky Mountains, to Olympic snowboarders Kelly Clark and Seth Wescott (they brought five Olympic medals between the two of them, three of which were gold) to the Director of Retail at major brands, including Smartwool, to other professional athletes: trail runner Dakota Jones, Olympic biathlete Maddie Phaneauf, fly fishing guide Hilary Hutcheson, and many more. Needless to say, I was in awe just being in this group of outdoor rec heavy hitters. Then, off to Congress...

We split into teams of geographic relevance. The athletes and companies from the Northeast talked to Senators and Representatives from that area; the Colorado team talked to mostly Coloradan congressmen and congresswomen, with some outliers like Rep Carlos Curbelo from Florida (relevant place on the topic of climate change) and Senator Jon Tester from Montana.

Now, to give some context of the atmosphere: it was Thursday, September 27th. The Ford/Kavanaugh hearings were happening in one of the Senate buildings literally while we were having our meetings. So yes, everyone was just a teeny bit distracted. Nonetheless, the vast majority of the Colorado team's meetings were informative and useful. 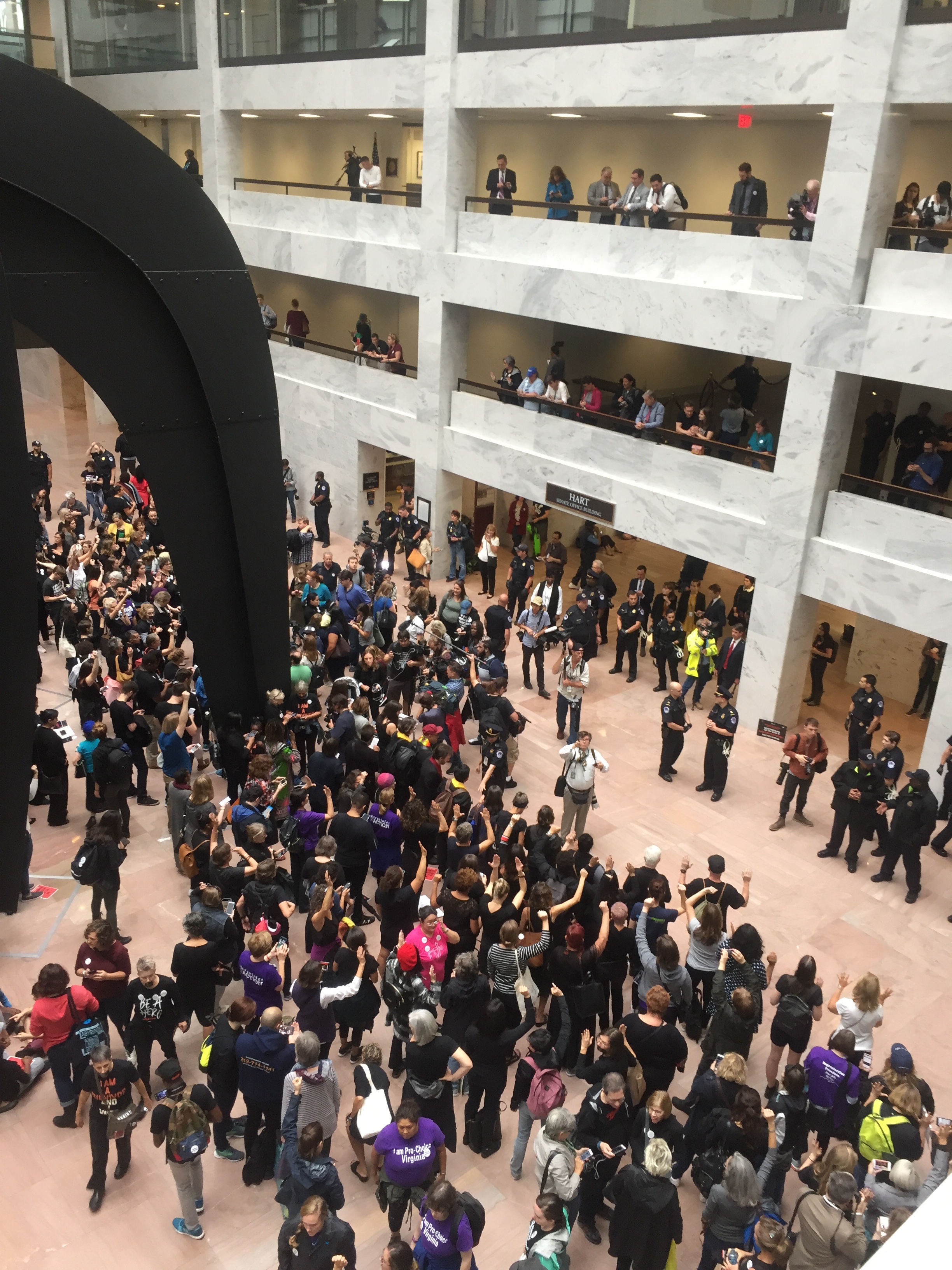 Kavanaugh protesters/supporters of Dr. Ford outside the hearings. Senator Elizabeth Warren walked through the crowd, talking to people and received a loud round of applause when she left.

We thanked Colorado's climate warriors like Senator Michael Bennet (D-CO), Representative Jared Polis (D-CO-2) and Diana DeGette (D-CO-1), and it actually felt productive. In all of these meetings, the lawmakers themselves were asking us direct questions about climate change impacting our industries.

Well, at first, Senator Bennet was more interested in hearing about Dakota Jones' recent bike trip from Durango to Colorado Springs to race the historic Pikes Peak Marathon (AND WIN), and then bike back to Durango, raising money for POW along the way. It was refreshing to witness that yes, Senator Bennet is a real human with a sense of humor and sense of awe. Not to mention, it was clear he's really proud to be a Coloradan. His office wall's were covered head-to-toe with gorgeous photographs of public lands in Colorado. Dakota pointed at the San Juans, "I see you like where I'm from?" Senator Bennet laughed and confirmed that he loves Southwestern Colorado.

Back to business, Senator Bennet asked the ski resort and winter gear people about how drought is impacting them. The answers, even though I already knew about the devastation, were especially shocking being told to a Senator. Aspen's CMO Christian Knapp told about how a bad snowfall from Thanksgiving to Christmas can mean sales will be down 25%, and part-time employees don't get enough work. In Aspen, that means some employees aren't able to buy food. Last winter, Aspen was providing meals to employees because the snow was so dismal and people did not have enough work to pay for basic necessities. It's the same across the country: without reliable snowy winters, ski towns go into desperation-mode. There is no 'other option' for work during winter. People are there to work in the ski and snow sports industries! 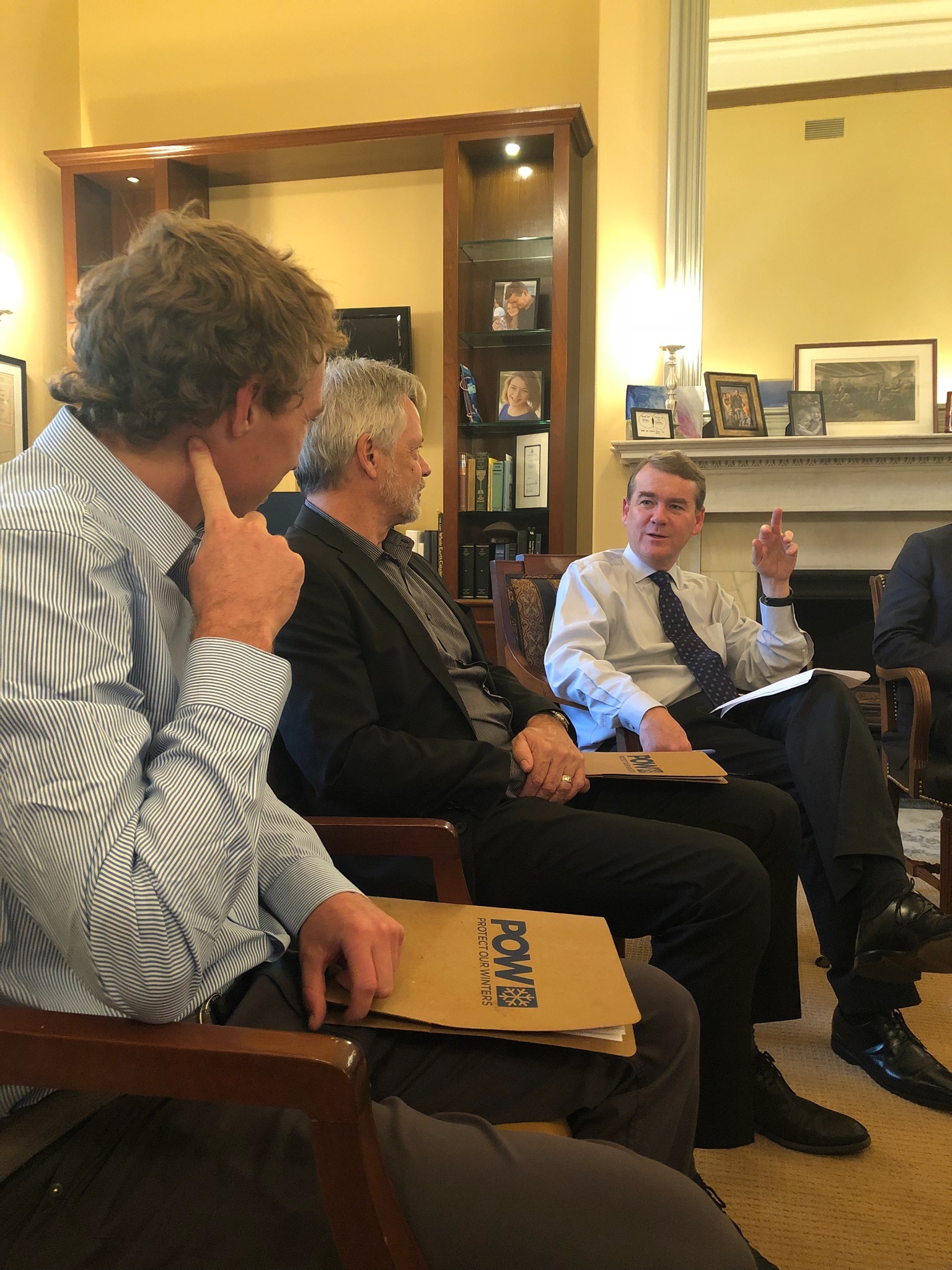 My story was about climate change's impacts on summer and trail running. The big story: forest fires. With a warming planet, we're seeing more severe forest fires more often. This doesn't 'just' mean hundreds of thousands of acres are burning, but it also means surrounding areas, like states five states away, are experiencing a lingering haze in the air. This fine particulate matter impacts our health. For people with pre-existing conditions, like asthma, they are more likely to have worse symptoms from difficulty breathing to respiratory infections to ER visits from pneumonia. Or, if you're healthy, over time, you're more likely to develop asthma or other respiratory problems. A recent study estimated the health cost of forest fires in Western States and the conclusion was shocking: On average, wildfire smoke in the Western US creates $165 million in annual health costs, mostly due to respiratory problems from an increased amount of particulate matter from forest fires.

This haze, and these health problems and costs, will only worsen as climate change worsens. I also shared how it's way less enjoyable to run in the mountains or in urban areas, anywhere really, when there's a layer of gunk in the air. People cannot exercise outside with such bad forest fires. That is something Congress can help alleviate.

Additionally, we met with Florida's Representative Carlos Curbelo (R-FL-26) and Montana's Senator John Tester (D-MT) to thank them. Rep Curbelo and his constituents feel climate change immensely from disappearing coastlines, including Miami and the Keys, to saltwater rising into freshwater sources and estuaries in the Everglades. He's championed the Market Choice Act of 2018 in the House, which would tax carbon. We also encouraged everyone else to co-sponsor this bill.

Thanking these lawmakers is important because if constituents stopped expressing their deep concern for climate change, it's not impossible to think they wouldn't be as proactive, and reactive, as they have been. Sure, the science is out there and it's indisputable. But, hearing a personal anecdote is more memorable than reading the spark notes of an academic paper.

The Not So Great Meetings

Meeting with Senator Cory Gardner's office wasn't awesome. I won't lie. Senator Gardner hasn't met with POW in person for the past three years. Of course, he could truly be always busy, but it's fascinating how the other lawmakers are able to find 15-30 minutes to meet with us.

We met with a staff member who was informative, but not in an optimistic way. For example, his staff told us what a "partner he's been to the Outdoor Industry Association." I then asked the aid what was Senator Gardner's favorite activity to do outside, you know, in Colorado. "He's outside on public lands in his ads, so I'm curious what's his favorite thing to do back home?" I asked. The staff member pondered for a moment and then answered, "Honestly, wow, that's a great question, but I have no idea."

Now, I'm not saying that Senator Gardner should have a favorite outdoor activity, but it felt like a slight to all of us for him to have not meet with us and then have an aid tell us he's been a partner to the outdoor rec industry, which is true--Senator Gardner has supported the Outdoor Industry Association--but he has not supported climate policy and environmental legislation. His League of Conservation Voters scorecard is 0%! That's not being a very supportive partner.

The reality of Coloradans is this: the vast majority of us recreate outside and 77% think CO2 emissions should be taxed, so where is Gardner's commitment to Coloradans?

I suppose I shouldn't be surprised that he doesn't prioritize the ski resorts, like Aspen who employs over 4,000 people in peak season and the over 220,000 jobs in Colorado in the outdoor rec industry if he doesn't personally care about it. Now, maybe we caught the satff member on a bad day where he wasn't as eager to talk with us as he meant to be. Maybe that's how all meetings are run in that office.

Either way, I left realizing that some lawmakers will never represent you no matter how hard you try to relate to them or to be heard. That's simultaneously depressing and motivating. Motivating because Gardner won his seat by less than 50,000 votes four years ago (he's up for re-election in 2020). We need to vote so that the people who we elect actually represent us or will at least listen to us.

The meeting with Representative Scott Tipton (R-CO-03) (his district is the entire Western half of CO) was similar. One staff member met with us, jotted down notes and said that Rep Tipton "doesn't like to join caucuses that don't take action." This was in response to the question, "Will Congressman Tipton consider joining the bipartisan Climate Solutions Caucus?"

I was shocked at this bold answer from a young aid who then followed her somewhat dismissive answer with this: "Yes, Scott is on the Ski and Snowboard Caucus. We will let you know if there's any relevant news." In case it's not clear, the ski and snowboard caucus doesn't do much in Congress, unlike the Climate Solutions caucus, which is trying to take a broad approach to tackling climate change impacts. 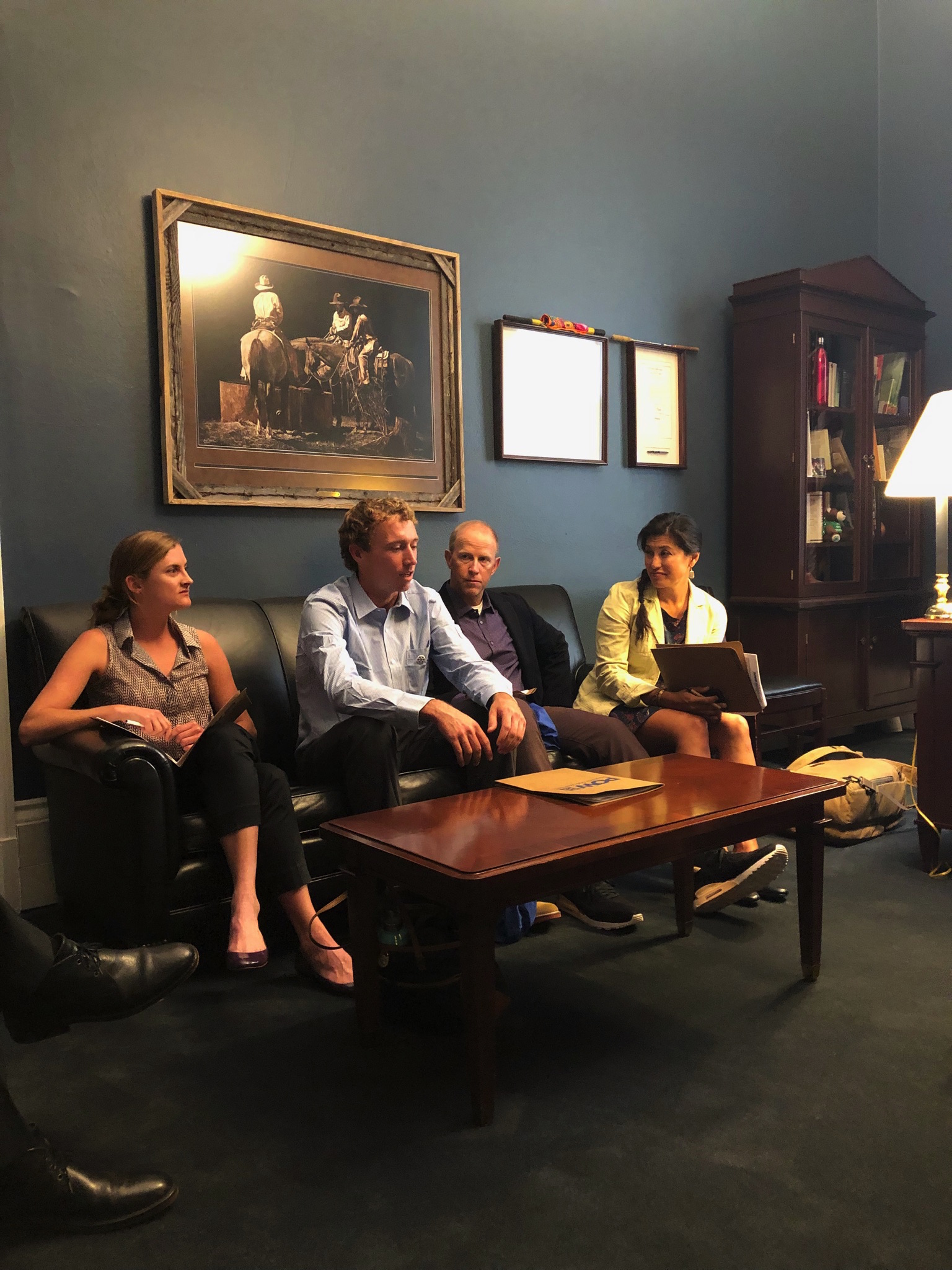 So, it wasn't the most uplifting or comforting of meetings since the level of expertise on climate change impacts didn't seem to be of importance. Again, this was with just one staff member. Hopefully next time, both Senator Gardner and Congressman Tipton can be present for meetings with POW, but I'm not holding my breath.

Overall, I found this process inspiring and inclusive. Anyone in American can get involved with a cause or organization they care about. Meeting with lawmakers is participating in the legislative process. Even calling your Senators and Reps is participating in the legislative process. I saw it with my own eyes: staff members actually answer phones from people back home and jot down the comments in a log. Our calls do matter. Our votes do matter. Congress is not that intimidating because it's glued together by staff members who are mostly younger than 30 years old.

My takeaway is: get involved. Our democracy needs you. Older generations don't, in fact, know everything, and when it comes to climate change, the facts are clear: young people understand the basic science of climate change and want action. So please, for the love of winter, summer and everything in between, vote this midterm. And make sure every single one of your friends vote, too. 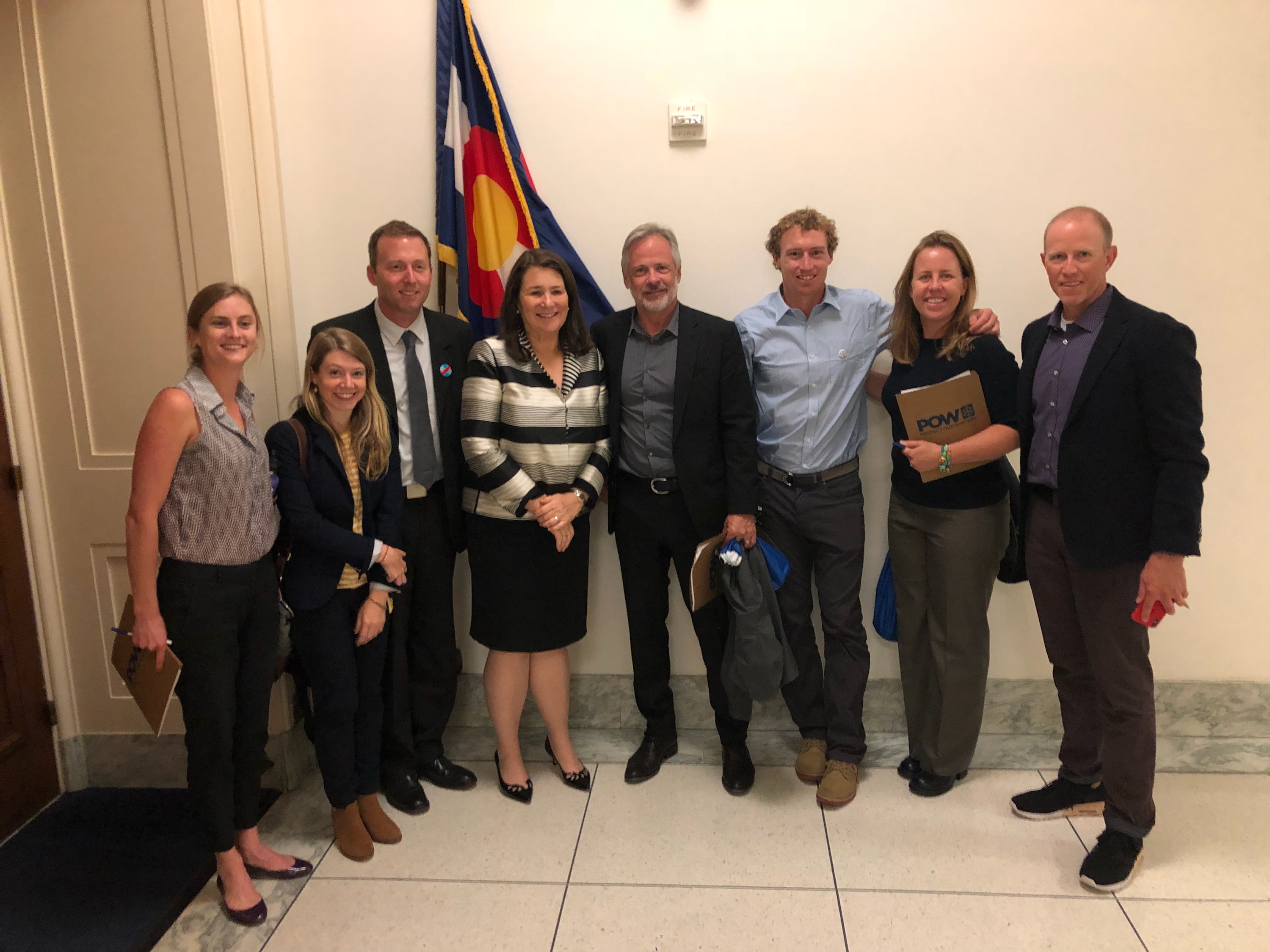 Congresswoman Diana DeGette flanked by Christain Knapp (Aspen), Lindsay Bourgonie (policy advisor at POW) and me on the left; Dakota, Robin Hall (Smartwool) and Brady Collings (Spyder) on the right. 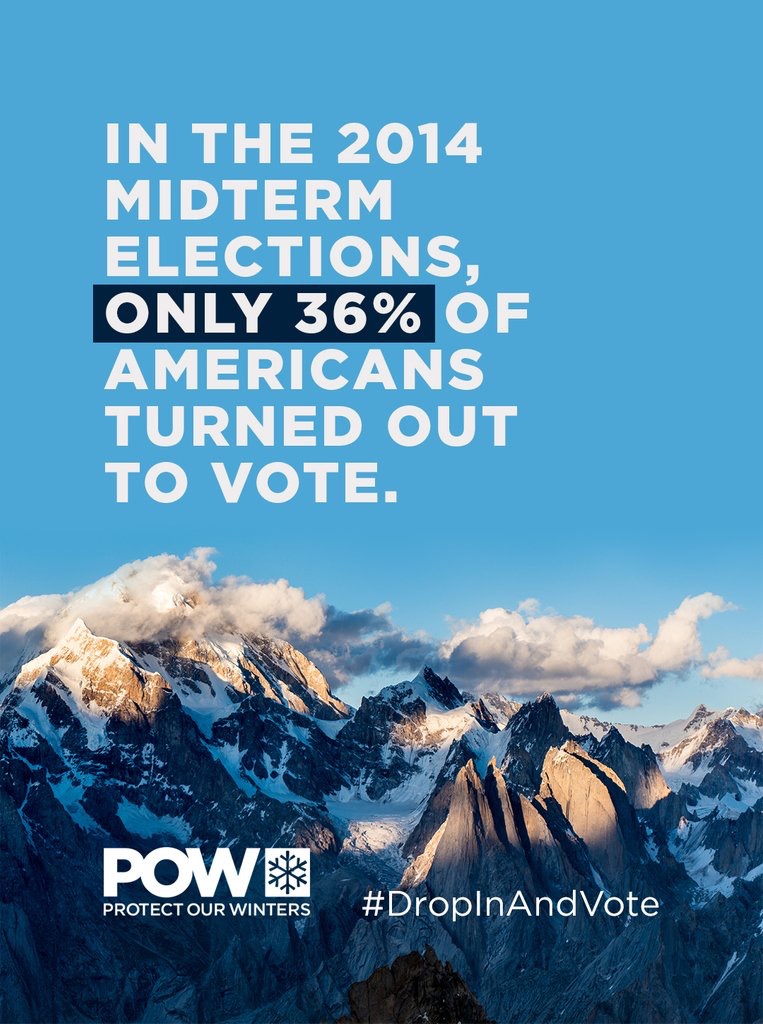 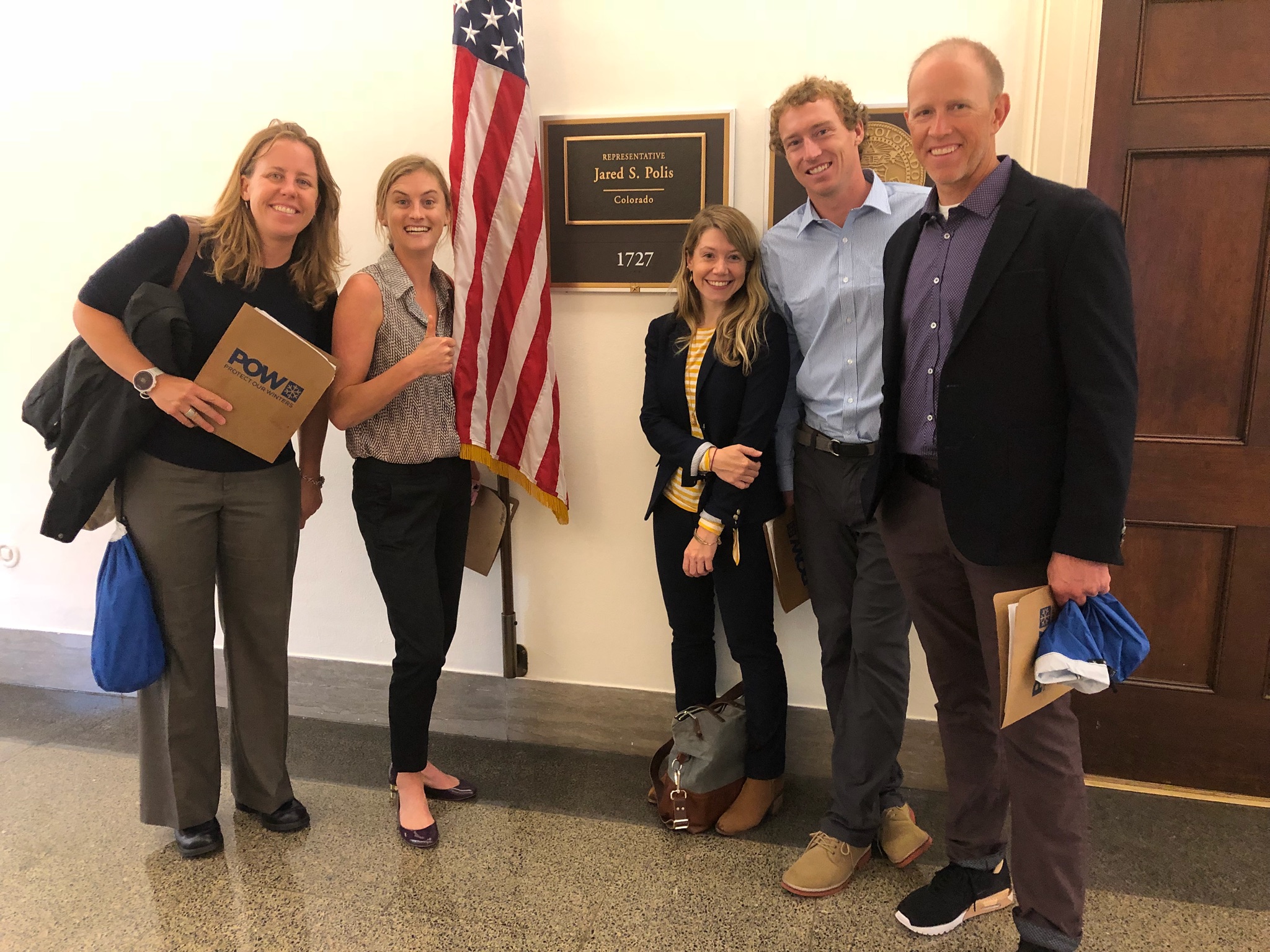 P.S. Another idea: if you're keen on knowing the in's and out's about your state's senators and reps, google them to no end! Start with League of Conservation Voters, get a general timeline of when they're up for reelection if they're a senator (all reps are up every two years). Get a grip on the state of climate policy affairs in your state, and make sure to research your state's midterm elections. I'll be posting about Colorado's next. Happy learning! 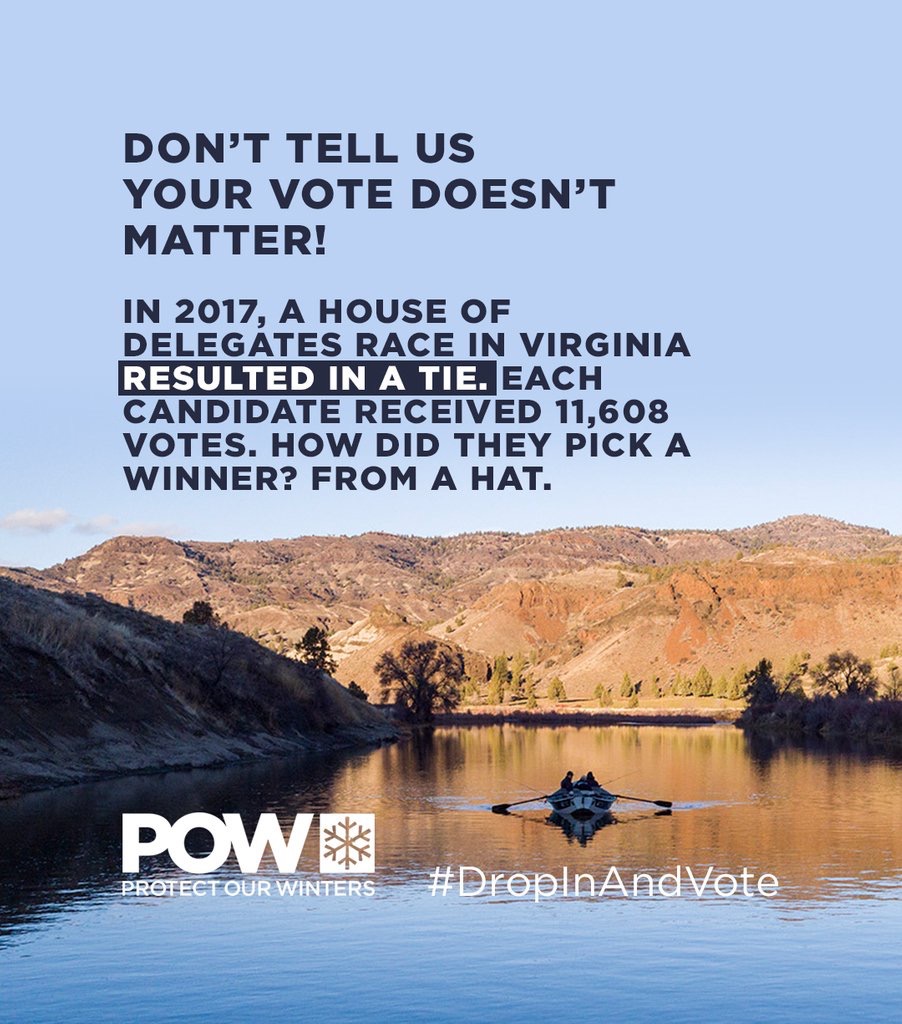