A few weeks ago, former Trail Runner Magazine editor, and now freelance writer, Paul Cuno-Booth, asked about the best running advice I’ve ever received. This inconsequential inquiry made me think long and hard, and has since piqued my spark to practice what I’ve been preached. He included a snippet of my thoughts in this article featuring numerous elite trail runners (all of whom I revere!). 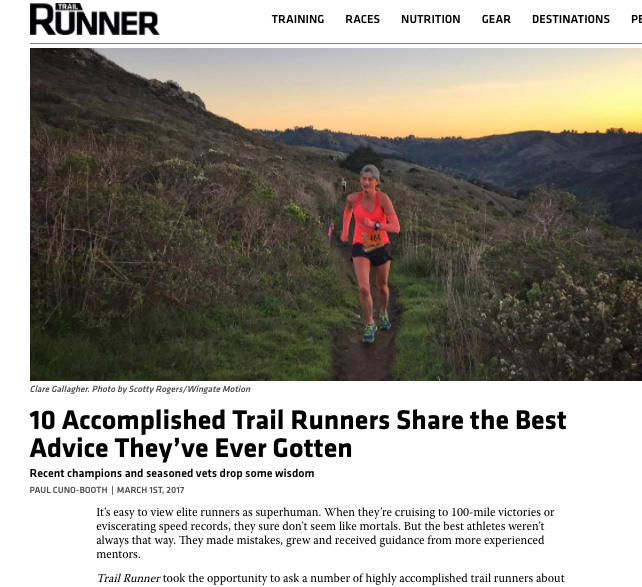 Here’s an extension of my thoughts on the best running advice I’ve ever received.

The best advice I’ve received is to ‘take it easy.’ And 100 variations of the platitude. Since I don’t struggle with motivation to train or to compete, my biggest demons are overtraining and overuse injuries. Taking it easy means a lot of things: prioritizing rest days, getting ample sleep, refueling adequately, resting at the smallest sign of injury, and the most important of all: don’t take yourself too seriously. This last piece was more curated from misplaced, unsolicited advice. For example, after I won Leadville, hordes of people miraculously became experts, giving advice that doesn’t have any place in a three-minute superficial conversation without proper context. Things like: don’t race more than three times per year. Don’t run with people slower than you. Run more mountains. Run more trail. Run more road. Take two tablespoons of coconut oil before every meal. Eat more meat. Don’t eat any meat. All of this advice tells me, “Clare, you cannot turn into these crazy people. You shouldn’t inflict your beliefs into every poor soul you meet, especially when you don’t have a real conversation contextualizing the advice.” In summary, the best advice I’ve ever received is: chill the F out and have fun. I shouldn’t be running if it becomes a chore. And I should run less in general.

The context and timing of advice is fascinating. Before wining Leadville, most people didn’t offer as much advice because I was marked as a former college runner. Somehow the latter is more knowledgable than a 24 year old winning a 100 mile race, never mind that person is also a former college runner. Additionally, it’s paradoxical how winning something solicits more advice than getting 2nd or top 10. Had I gotten 2nd in Leadville, I likely wouldn’t even have been interviewed by Cuno-Booth for his article. The veneer of an impressionable runner with a smidgen of promise somehow acts as an inviting basin to advice givers. If I lose that veneer, and gain an air of ‘experienced trail runner,’ maybe the advice will wane. Regardless, I’m always open to advice, good or bad. Interestingly, David Roche also interviewed me for Trail Runner Magazine right after Leadville, subtly providing very pointed and appropriate ‘take it easy’ advice. He was never pedantic and always backed his advice with reasons. It stuck with me throughout the next four months and I ended up asking him for more training advice for the remainder of 2016. He’s now my coach.

At the end of the day, I know I’d be nothing without advice, espeically the unsolicited type. Cuno-Booth’s inquiry reminded me of how much I respect ‘taking it easy.’ I’m trying to take Coach Roche’s instruction more seriously, i.e. maybe that extra 5am ski tour might not be the best thing in the long run.