Update: The Vermont 100 awarded top 10 men and top 10 women recognition at its award ceremony. Thank you for empowering our sport, women, and for doing the right thing. I will leave this blog below in order for others to use my reasoning to show other races that still don't have equal awards the importance of equal awards for men and women. I understand that the Vermont 100 was not the only race that at one point had unequal awards--in fact, there are still surely more out there. I appreciate your understanding that this issue is bigger than one race and that one race director or one person was never the problem. It takes a community to approve of races and a community to speak up when necessary. So thank you. Keep speaking up for what's right!

After learning that the Vermont 100 mile trail race (VT100) gives awards to the top ten men and only to the top five women, I became upset. Upon reading the race director's rationale for justifying this decision, I became even more upset.

After a few days to think over, the race director's choice to give awards based on gender-specific participation no longer upsets me, as I’ve concluded this choice prevents the VT100 from being a legitimate race in my mind. The VT100 cannot still consider itself part of the modern definition of sport if it continues to its current awards structure. For readers unaware of the race's justification, here it is, taken directly from the blog:

Now, I'm a numbers person. I want there to be more women running, and want stronger female competition. However, I define equity differently than some others (including you two) do. I think equality is recognizing the same percentage of the two genders, which in an ideal world would be the same number but at VT100 is not. Perhaps I should change it on the website to state that we'll recognize the top 4% of either gender (but never less than 5 and never more than 10), as that's actually what we do. Here's the numbers that have run the VT100 over the last 5 years:
2018 - 76% male
2017 - 79% male
2016 - 79% male
2015 - 80% male
2014 - 79% male
The numbers have been fairly consistent, at more than 3/4 of the race being men, therefore the top 3.7% of men each year get recognized and the top 6.9% of female every year gets recognized. How is that unfair to the women?

Here, I explain why the decision to award prizes in this chosen manner excludes this race from actually being a standard trail or ultra race in my mind, and likely in the mind of anyone who agrees with the universally agreed upon definition of female competition and male competition within sports. I don't want to pounce on this race director or this race (on the contrary, this blog is only about facts, not an RD). Instead, I want to elucidate how important it is for races to give equal awards recognition to men and women.

Unless specified as co-ed or mixed, sports separate comparison between genders. Sports as we know them in modern times are innately gender-specific. If I sign up for any race of any kind that isn’t specified as co-ed, I assume that I’m competing only against other women, independent of the size of a parallel men’s field. Why have we adopted this definition of sport that completely separates men’s and women’s fields? The biology and physiology of males and females demands it.

It is indisputable that males have advantages in muscle mass, VO2 max, and testosterone levels compared to females, among other physiological advantages, giving males innate advantage in sports. There are practically endless sources of evidence of this, and I will not expand upon it further. Please read the scientific papers explaining these differences amongst genders. It’s widely accepted that “women will not run, jump, swim or ride as fast as men.” Moving on.

Since sports innately compare the physical prowess of participants, it follows that genders are separated. Males only compete against males and females only compete against females: this is our standard sports definition. All running races, from track to road races to ultras and to trail races have almost universally adopted this structure over the past decades.

Now, under the VT100 RD's justification for its awards, there is a key difference from how it gives awards compared to our modern sports definition of how a race or sport should allocate awards.

The RD's justification necessitates that the total participation of each gender be taken into account for how many awards are to be allocated per gender. That means, awards aren’t based on a standard top 3, top 5, top 10, etc. Instead, top performers are shackled to the size of the their genders’ fields.

I understand that the RD's percentage-based statistical analysis makes sense if you want to recognize top performances not as stand-alone feats, but as proportionate to the gender’s field size. Great. Go for it. That is just not normal, nor female empowering, by any means.

I must be blunt here: the VT100 is not consistent with our universal understanding of sport. If this were how all sports recognized awards or podiums or top performances, we’d see something like the following.

EXAMPLES OF WHY THIS JUSTIFICATION IS WRONG

Let’s take the Olympics. If the IOC granted awards based on each gender’s total participation, following the VT100 logic, we’d see a horrifying result.

Using the VT100 logic, for Olympic road cycling, 4% of 145 males would justify awarding six medals. That would fill the standard gold, silver and bronze per each event. But, for the women? 4% of 67 females rounds up to three medals. So what would the Olympics do? Award a gold for each event and then silver for the event where more women competed? Imagine the IOC having to explain to the world and to the three remaining medalists who weren’t awarded medals,

This would be insane! An absolute outrage. And this is why the VT100 logic is embarrassingly flawed.

Lo and behold, the Olympics and all internationally revered sports federations, from the IAAF, USATF, to the IAU, do not adopt this type of award-structure gender-participation based logic. That would defeat all goals in empowering women’s participation in sports, which these same federations vocalize as being of upmost importance (Olympics, IAAF). Adopting the VT100’s awards structure logic would defeat the RD's overarching goal in the first place: to increase women’s participation and competition.

More examples of how the VT100’s logic is flawed: 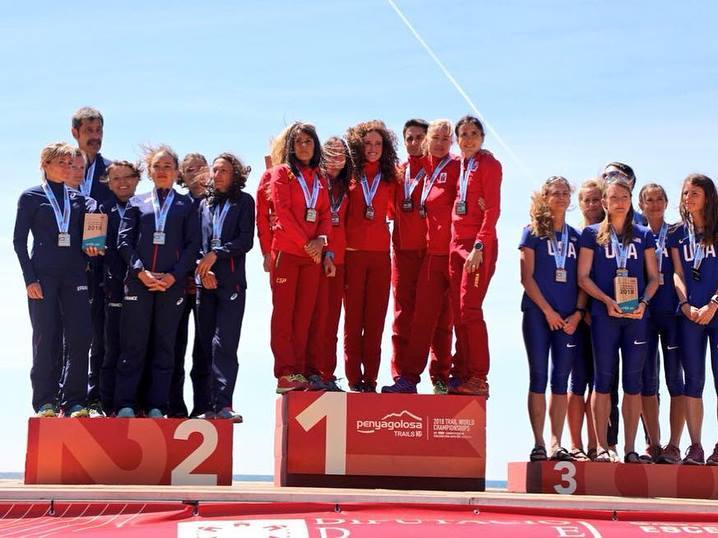 “Sorry, ladies, more of you should have started and/or finished the race.”

Considering I happened to represent the USA in this very event, I can assure you I would have made such a scene the IAU would reconsider its logic. But, thankfully I didn’t have to. The IAU doesn’t award performances based on gender-specific participation.

Not to mention, there were countries at this year’s Trail World Championship without entire women’s teams, like Venezuela, which had four men competing. Why? No surprise, women’s sports are not as well funded in some countries and women have fewer opportunities to participate in sports, including trail running.

Do you think that more women from underrepresented countries and demographics would be motivated to cross the many societal and cultural barriers it takes to participate in sports if they saw unequal recognition of top male and top female performances? Absolutely not. Such inequity on podiums makes women feel they have less of a place in sport. 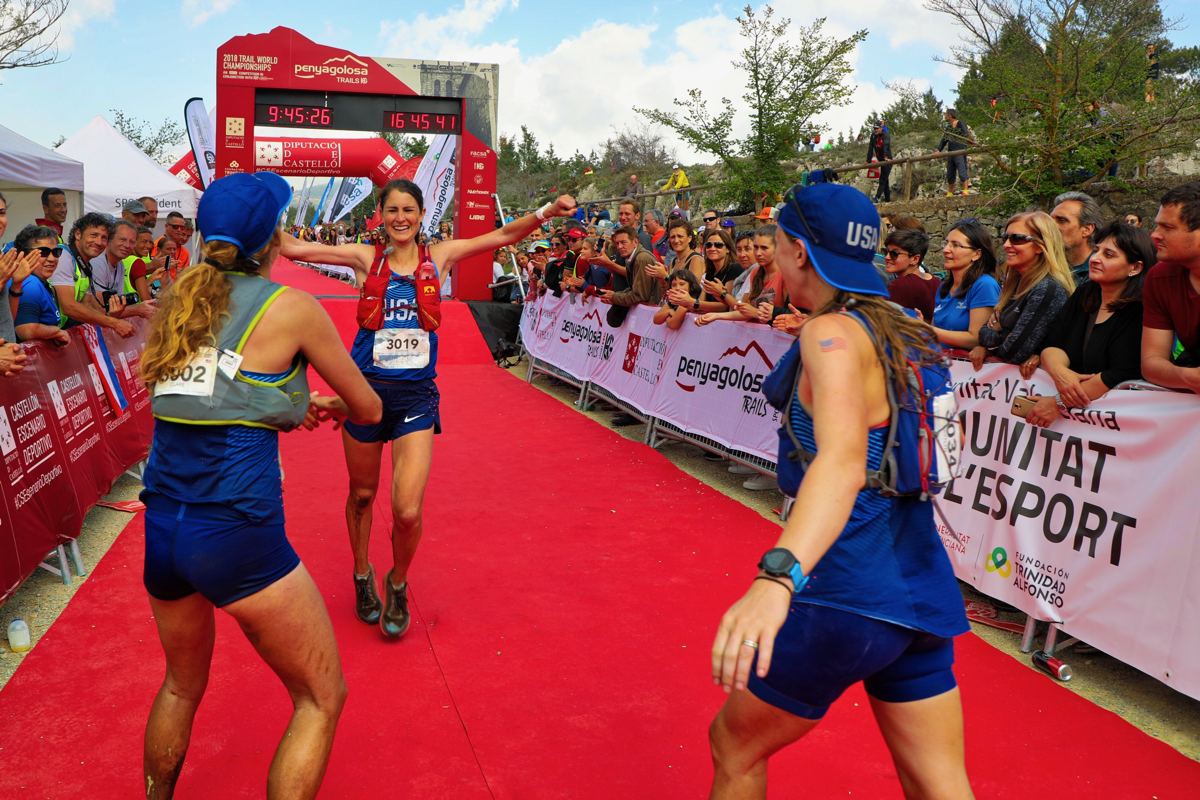 For one final example of why the VT100 logic is flawed:

Imagine if Western States used this justification. The ultrarunning world would see not ‘Top Ten Women’ and ‘Top Ten Men’ recognized on Sunday morning on the third weekend of every June. From this year’s results, borrowing the VT100's awards structure, 60 women finished and 4% rounds up to three women. 239 men finished and 4% rounds up to ten men.

Imagine: ten men would be recognized alongside only three women. I can’t even fathom the outcry this would produce in our tight knight community. But, lest us not forget: this is exactly what the well-known and internationally recognized Vermont 100 is justifying. There should be an outcry. 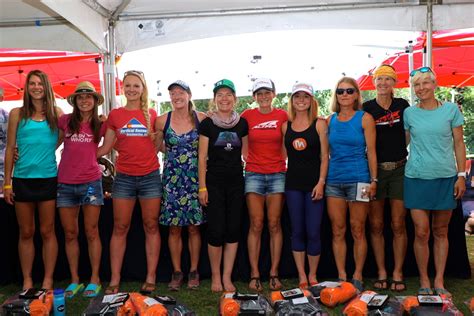 SPORTS ARE BETTER THAN THIS

If the RD wants the VT100 to continue being this type of ‘race,’ then fine. However, I urge her to make it clear that this is not a standard race and does not adhere to the standards that others races and sports federations worldwide use to recognize top perfomances, let alone the standards that promote women’s equity and empowerment through sport.

To all of the trail and ultra runners out there, choose your events wisely. We’re all conscious consumers. I for one know that I will only choose to support races that value female competition and male competition and further progress women’s empowerment through sport.

If we can’t figure equity out in sports, how can we possibly attempt to break way more serious and critical glass ceilings and female oppression worldwide? Not to mention, sports are such an easy way to empower women and young girls worldwide. For a race to fails to get the whole point of ‘sport’ as the world sees it, it excludes itself as an empowering event. It’s so easy to do the right thing. In the case of the VT100, give the top 5 men and top 5 women awards and raffel off the extra 5 men's awards. In general, the easy route is to have female competition and male competition with standard awards recognition independent of overall gender participation.

If any of this blog is confusing or you’d like to read more, please read the many resources I’ve linked to and listed below. Please don't hesitate to reach out with further thoughts to add to this very important discussion or if I've mistakenly spoken on anything or personally offended anyone.

Additionally: Races around the world have quickly fixed their unequal awards structures for the past decades, from UTMB when Rory Bosio called them out, from Sky Running this summer, from Mt Fuji last year. These establishments were embarrassed to be called out for failing to adhere to our universally agreed upon definition of how female and male races are separate. Awarding female racers half the awards that the male race receives is innately discriminatory. I applaud the quick action of astute people like Silke Koester, Nikki Kimball, Cassie Scallon, Gina Lucrezi, and Sandi Nypaver, for calling out races, and to the races themselves that have risen to the occasion to fix this discrimination quickly and without hesitation. I hope the Vermont 100 will do the same, or at least make it very clear in their race description how this is far from a standard male and female race structure, but instead a race where awards are given based on percentage of gender participation. To the woman who contacted the RD in the first place, thank you. I don’t know who you are.

Other resources and must-reads:

United Nations: Division for the Advancement of Women Department of Economic and Social Affairs

Equity versus equality in ultrarunning

Two races on one course: our understanding that there are two races where two genders compete simultaneously!